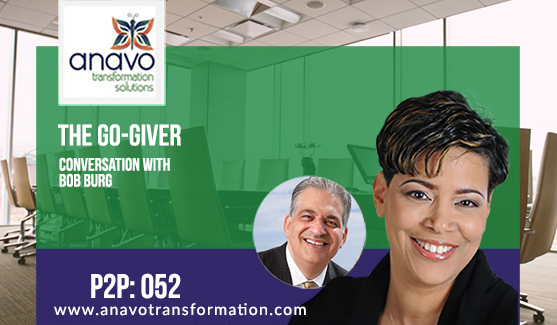 Bob Burg is a sought-after speaker at company leadership and sales conferences sharing the platform with everyone from today’s business leaders and broadcast personalities to even a former U.S. President.

Bob is the author of a number of books on sales, marketing, and influence, with total book sales of well over a million copies. His book, The Go-Giver, coauthored with John David Mann has sold over half a million copies and it has been translated into 21 languages. It has been released in a new, expanded edition, with a foreword by Huffington Post founder and publisher, Arianna Huffington.

Bob is an advocate, supporter, and defender of the Free Enterprise system, believing that the amount of money one makes is directly proportional to how many people they serve. He is also an unapologetic animal fanatic and serves on the Board of Trustees of Furry Friends Adoption & Clinic in his town of Jupiter, Florida.

You always take the focus from yourself to the other person. @BobBurg

What You’re Going to Learn

Selling is simply discovering what the other person wants and… @BobBurg

Where to Connect with Bob

Get Bob’s Book: The Go-Giver

Has Your Business
PLATEAUED?

Download Our
FREE Audio!
5 Critical Mistakes Every CEO
Must Avoid!

[Lisa] has transformed my thinking. My obstacles are now growth opportunities. My “mistakes” have become best practices upon which to build. She is very inspiring and has helped me transform my “lemonade stand” mentality into something greater. My confidence has been greatly increased through her encouragement and expertise.

I have had the immense pleasure of working with and observing Lisa in a number of different capacities, over many years, and no matter if she is serving as CFO, CPA, Success Coach, Teacher, Advisor, Entrepreneur, and trustworthy friend and professional - all of which, she does consistently well - she has led and managed END_OF_DOCUMENT_TOKEN_TO_BE_REPLACED

…having a wise person such as Lisa to assist me with practical strategies and keeping me focused has made all the difference. The accountability each week inspires you to stay motivated, as you tend to be so excited to “boast” about your accomplishments at your next session…

I knew that I was at the point in my organization’s growth where I wanted and needed someone who was willing to share about their business experiences so that I might become more confident in my own decision making; someone that I could talk to and get my thoughts straight; someone connected and respected by END_OF_DOCUMENT_TOKEN_TO_BE_REPLACED

[Lisa Anderson} has provided critical management oversight and has further played an instrumental role in analyzing the company’s financial condition.  Lisa has helped make critical business decisions while providing insight on financial impact on those decisions.  Lisa has served as Coach and Business Mentor to our Executive Management Team and our staff.  Her simple, yet END_OF_DOCUMENT_TOKEN_TO_BE_REPLACED

[Lisa Anderson} has provided critical management oversight and has further played an instrumental role in analyzing the company’s financial condition.  Lisa has helped make critical business decisions while providing insight on financial impact on those decisions.  Lisa has served as Coach and Business Mentor to our Executive Management Team and our staff.  Her simple, yet END_OF_DOCUMENT_TOKEN_TO_BE_REPLACED

I can't say enough about Lisa Anderson and Anavo! I needed guidance with business proposals and when to use them. Lisa listened and knew exactly how to help me. She transcended me to the next level. I don't think it was a coincidence that shortly after our consultation, business inquiries picked up and I had END_OF_DOCUMENT_TOKEN_TO_BE_REPLACED

What can I say about Lisa? There are so many positive adjectives to describe her. Personable, motivating, professional, sincere, honest, smart, and willing. I've known Lisa for over 15 years personally and always knew she was special, but it wasn't until I started venturing into entrepreneurship that I realized what a true gem she really END_OF_DOCUMENT_TOKEN_TO_BE_REPLACED

Here’s what you need to understand: I am no amateur!   I am a trailblazer who fought my way to the top of the accounting food chain at a time when the industry was dominated by men who had no interest letting a woman have her slice of their pie. I became a Certified Public Accountant, was … END_OF_DOCUMENT_TOKEN_TO_BE_REPLACED